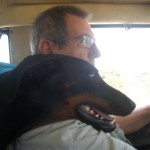 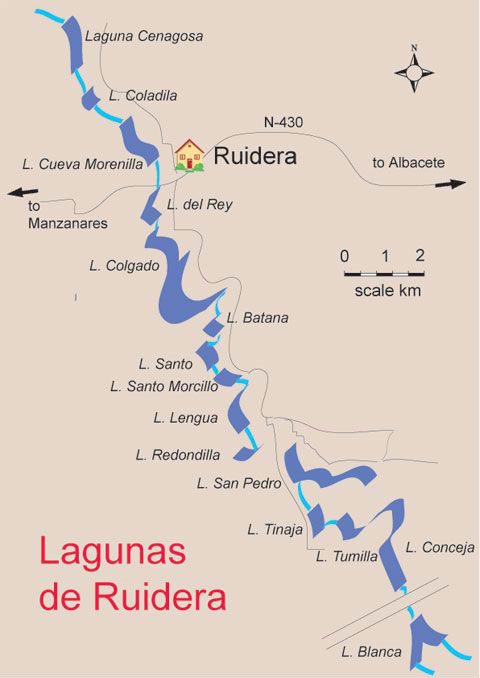 SITUATION Ruidera, is a town in the province of Ciudad Real, whose economy gravitates, almost entirely, around tourism. It is located in the middle part of the basin of the Upper Guadiana River, giving its name to the entire lake rosary, and is located in the northern part of the Campo de Montiel. This fluvial zone covers an approximate extension of 4,000 hectares, of which 3,772 belong to the NATURAL PARK of the LAGUNAS DE RUIDERA.

If we want to reach the source of the Alto Guadiana, while still contemplating the lagoon rosary, we have to go back to the road, bordering again the Laguna San Pedra, which like La Lengua, at its mouth, is flanked by a picturesque limestone wall.

The Ruidera Lagoons is a place of great beauty located in Castilla La Mancha, in the limits of the provinces of Ciudad Real and Albacete. This Natural Park is formed by a complex lagoon system made up of fifteen lagoons that constitute the valley of the Alto Guadiana, with a diversity of environments to discover and explore, knowing its lagoons of transparent waters and intense turquoise blue color. It is the most important wetland of the Community of Castilla La Mancha.

Boats can be used as long as they are not motorized and do not disturb the aquatic fauna, and navigation is prohibited in the Conceja, Coladilla and Cenagosa lagoons. In some of the beaches there are companies that organize water activities.

The park’s vegetation is very diverse, ranging from native forest formations to marsh vegetation. The slopes and high areas are occupied by holm oaks, kermes oaks, junipers and junipers. The holm oak forest is replaced by a dense scrubland composed of kermes oak, labiata, broom and gorse in more open areas.

The Lagunas de Ruidera Natural Park is located in the Upper Valley of the Guadiana River (or Pinilla River) and serves as a provincial boundary between Ciudad Real and Albacete. From Ciudad Real or Madrid you can get to Manzanares by the N-IV, and from there by the N-430 road, passing through La Solana, Alambra and Ruidera. From Albacete by the N-430.

The remains of this factory, rebuilt in 1842, are scarce. The bridge is preserved, with arches on the road from Ruidera to La Solana, almost unrecognizable remains of the mills and remains of the stonework of the buildings with lintels and arches still standing, as well as some mortars on the floor, individually carved in a block of stone, hemispherical. The complex is of great interest because of the buildings built by Carlos III for the gunpowder, of which a part is still standing, as a farmhouse, in the village.

The natural park of the Ruidera valley is located between the provinces of Ciudad Real and Albacete, it is one of the most beautiful places of our Castilian-La Mancha lands and has a great hydrogeological and geomorphological interest. It is a center of tourist and ecological attraction. It has seventeen lagoons, counting those of Nava del Caballo and Escudera, which are sometimes considered ponds.